Terry Bare: "Homeless Veterans Stand
Down an opportunity to serve!" 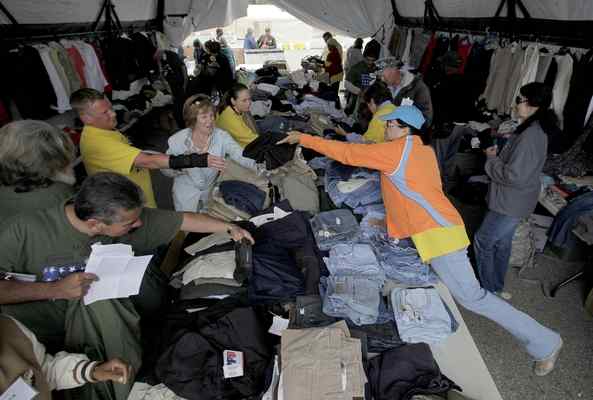 Veterans look through clothing at the 2014 Monterey County Homeless Veteran Stand Down in Seaside.        (Photo courtesy of Vern Fisher - Monterey Herald)
By Terry Bare, Guest commentary
Let me tell you about Vic. He served in the Army a few years back. Did some good things, some tough things, saw some of the world. He walked in our front door not too long ago on a cold, unfriendly day. Life had him pretty beat down. He was living at the edge of a local park and sleeping in the bushes every night.  For 12 years!  MORE.....         (Article courtesy of the Monterey Herald. Sunday 14 August 2016)

For years James Bogan has helped and continues to help Veterans in any way he can. If a Veteran's group needs something and all others have given up trying to find a solution to the problem, he won't stop until he solves it. Through his efforts, a transportation service was established to take local veterans up to the Veterans Hospital in Palo Alto. He is also one of the four original Veterans who joined together to form the Central Coast Veterans Cemetery Foundation in 2003. This organization has been solely responsible for raising all of the three million dollars necessary to build the first section of the Veteran’s Cemetery in Salinas, turning a dream into a reality. James is truly a Vet’s Vet.   (Editorial KSBW-TV, 4 April 2016)

The Ambitious Plan Housing the homeless requires political will and a lot of cash, but is it doable?

David Lopez woke up wet and shivering on the ground behind a row of hedges in downtown Monterey. To say he woke up might be saying too much. The chilly night didn’t give him much rest. As the first pedestrians of the day started walking by his sleeping quarters, he pulled himself up, brushed off as much mud as he could and made his way down to the waterfront hoping he could find company with one of his few friends.    More......                        Article from the Monterey County Weekly

Military vets face a lot of challenges in the service, and sometimes, after leaving, they’ve got one more problem to deal with: homelessness.       More.....